So I ordered another hard-to-source thing from #@!% hansautoparts (lol), while I was at it add a couple transmission drain plugs.
https://www.hansautoparts.com/WHT001937 ... -Plug.aspx
Noticed the plug had a recess on the inside that would be perfect for a magnet.

I had some HF magnets so I checked the size - 8mm. The recess in the plug is 7.4mm.
The depth of the recess is more than the thickness of the HF magnet, so I grabbed a regular 5/16" drill bit (didn't have an 8mm)
and drilled it out a little,. Seemed to be good enough, but tight.
So I heated up the plug with a torch

and the magnet dropped right in. Bad part was the heat killed the magnet. Fail
Found out most neo magnets are good to ~250F but lose power above that and are killed ~600F.
The good thing is, because of the gap under the magnet I just hit it with a small punch and the dead magnet breaks and falls out.

Tried it again, worked the drill bit around a little more, warmed up the drain plug just a little.
Tapped it in as best I could into the now-ugly flame tempered plug without damaging it, careful not to even scratch the magnet. 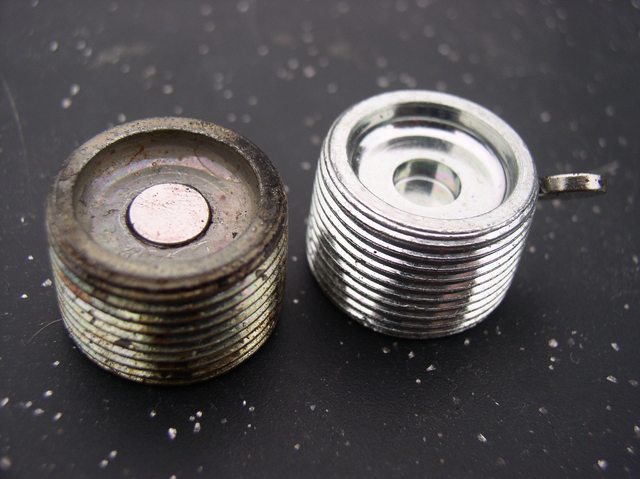 I did put a little red loc-tite in a spot, but didn't want to completely seal the magnet as there is a small air pocket behind the magnet.

So it's a magnetic drain plug for less than $3.
What could go wrong

Interesting that a supermagnet dies when you heat it.
I might have JB welded it on.
Good idea, I'll have to take a look at my drain plug next time I change oil.
'91 Golf gasser converted to turbo diesel.
'83 Rabbit gasser, converted to diesel, then converted to run on vegetable oil.
2, '84 GTI projects cars
Top

after some more thought, the temp rating should be higher to make it worth the trouble.
Although it won't kill the magnet, it would lose some magnetism from heat - not sure how much
so I do NOT recommend using the HF cheapo magnets

figured might as well go with bigger=better too so I kept searching...
https://www.kjmagnetics.com/proddetail. ... SH&cat=167
and the description says it's just for that

These 3/8" magnets are awesome, very powerful. Drilled the plug a little with a 25/64" bit 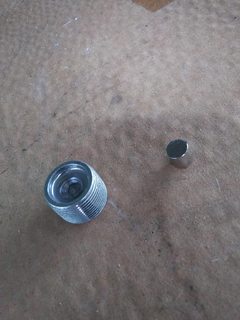 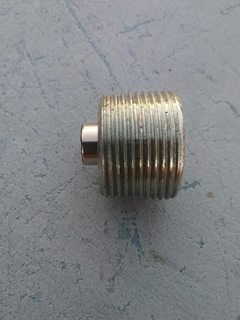 I made 2, used Jbweld in one of them, but the other didn't seem to need it - tighter fit. 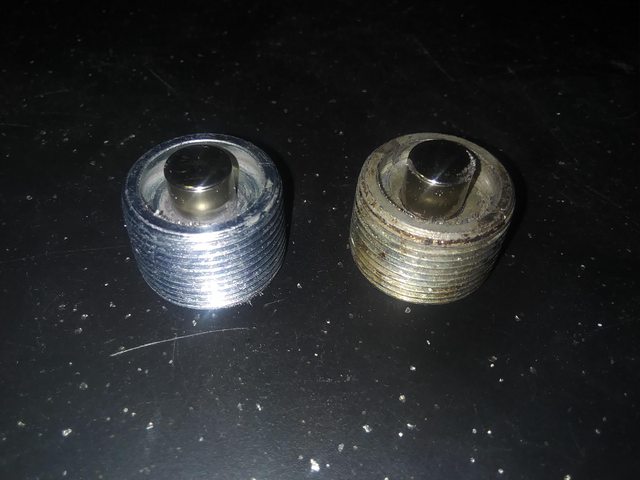 Stuck one to my oil drain plug

Cleaned and sanded the plug a tad, then gave it a drop of jbweld.
Stick the magnet to the plug carefully so it doesn't make a mess, had one do-over. 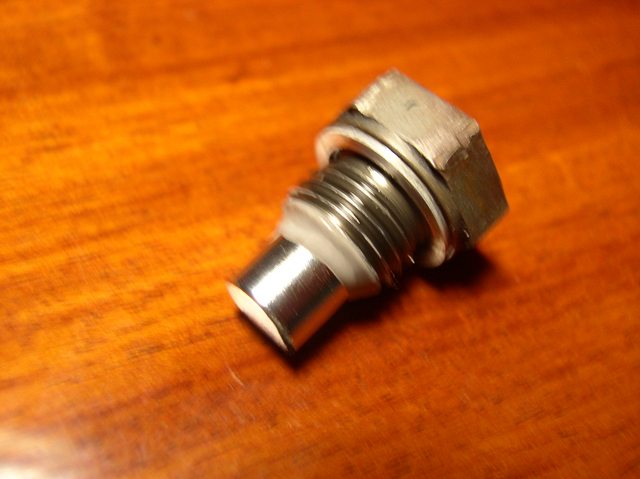 Worst case if it gets knocked off screwing it in/out it will just be stuck to the inside of the pan. If I take the pan off I'd leave one inside anyway, but on the bottom.

I guess this is the proper way to mount the magnets.
But, they are SO powerful, so why not just stick one to the drain plug
for the tranny or oil drains? I put about four of them on the oil
drain plug so that I can still get my wrench over it and remove it
without losing the metal that it picks up. Easy clean up too, since
the plug is mostly demagnetized with the magnets removed. Next
time I pull a plug I'll check out just how this arrangement, magnet
on the outside, picks up iron filings.
I can't imagine what a 1 inch magnet would do, even on the outside.
Never mind, you might not be able to remove the plug!!!!
1991 Mk2 Jetta non-turbo, 1.6 Diesel, engine code ME, hydraulic valves,
5 Speed 020 AWY 04120 Transmission
318,000 miles, Original Owner; Vancouver, WA
Located in: Vancouver, Washington
Still Looking for Engine Rebuild Options in Portland, Or Area
Top

The oil pan drain plug was kinda difficult to start when I screwed it back in because the pan is steel. The plug kept wanting to tilt off-center.
A powerfull magnetic field inside the pan is great though, sort of a "by-pass" filter for steel/iron particles of any micron size.
81' Scirocco 1.6D (conversion)
86 Golf 1.6D
85' 300TD
Top
Post Reply
7 posts • Page 1 of 1