This is a place for us to share progress on and upgrades to our vw diesels.

I just bought one of those mk1 steering column bushing repair kits from mk1engineering.com .
My hack job is still working, but starting rattle sometimes at idle so picked one up to fix it right some day.
That kit is a real blessing for the price,
https://www.ebay.com/itm/182893002005?h ... Swk-1aKA3n
but they may stop selling them for all I know. Any one of those components is rare to find in stock anywhere these days.
81' Scirocco 1.6D (conversion)
86 Golf 1.6D
85' 300TD
Top

I've been stuffing a 3/4" washer into the end of the column
to hold everything in.
It usually works but I had one fall out so I made a tin thing bent around the column to hold it in.

I have needed the delrin bushing,.. like I needed one on this truck.
To take the slop out of the right rod coming from the rack going to the tie rod.
The one I put on this truck was so tight I could feel the drag on the steering.
Until this last test drive where the steering was smooth.
So it might be broke in.
'91 Golf gasser converted to a 12mm pump, M-TDI.
'84 1.6TD Rabbit with a VNT-15 turbo, still setup to run on vegetable oil.
'84 GTI with 1.7TD pistons and intercooled.
2003 TDI wagon
2000 TDI Jetta.
Top

Mine has the plastic bushing on the inside was starting to crumble, but I put it back together with the old pieces anyway.
Put a zip tie on the inside so it couldn't ride up and a hose clamp on the bottom so it couldn't fall out. It works, but with more play in it now, it must be on it's way out. The washer(s) addition sounds brilliant, but I think this one is beyond fix.
Btw, my order hasn't done anything yet, "unfulfilled"

With a cold engine you can sometimes tell by feeling them after running the heaters a cycle and not starting the motor.
One cylinder may be completely cold or just weak. I would not recommend grabbing them tightly

I made a video of testing glow plugs on our 300D. https://youtu.be/R2c2IhWp15w
As you can see the injector sprays right on the glow plug.

For a long time I didn't realize how they operate but we use electricity to heat them which assists in the burning in a cold engine but the glow plug contributes significant heat to the pre chamber the entire time the motor is running.
Top

Fat
Instead of a delrin bushing find someone with a 3d printer and make one. It wouldn't be as long lasting maybe but then again it might work fine for quite a while. Never had the steering wheel off so can't visualize the part.

I have used mine for lots of bushings and parts on all sorts of things around the farm.

For some solutions you can wrap twine or tape around an area that loose or out of tolerance.

For heavy duty solutions, maybe making a tool, I begin to think of the mig welder.
Top

The bushing I'm talking about goes around the inside of the housing,
around the shaft the tie rod screws onto.
The passenger side end gets loose and moves side-to-side.

It would be nice to have a 3-d printer.
I don't know anyone else that has one locally so maybe I should get one.

Well it's time to do some more body work on (Pa)Tina.
It needs the rest of the rocker panels repaired in stainless.
Along with several patches on small holes.
I'm starting with the passenger side this week.
I'll be posting pictures of the progress.
'91 Golf gasser converted to a 12mm pump, M-TDI.
'84 1.6TD Rabbit with a VNT-15 turbo, still setup to run on vegetable oil.
'84 GTI with 1.7TD pistons and intercooled.
2003 TDI wagon
2000 TDI Jetta.
Top

I got a bunch of rust repair done on the Rabbit this fall.
It was way worse than I imagined but I've already put so much time into this car it's hard to let it go.
So here it begins on the passenger side rear rocker:


I know it looks bad and that's the area the rear end is bolted to.
But the inside area where the rear is actually bolted to is very solid.
I've had a rear end break off before so this is an area I keep an eye on.
I've been spraying it with SP-400 from the inside access for years. 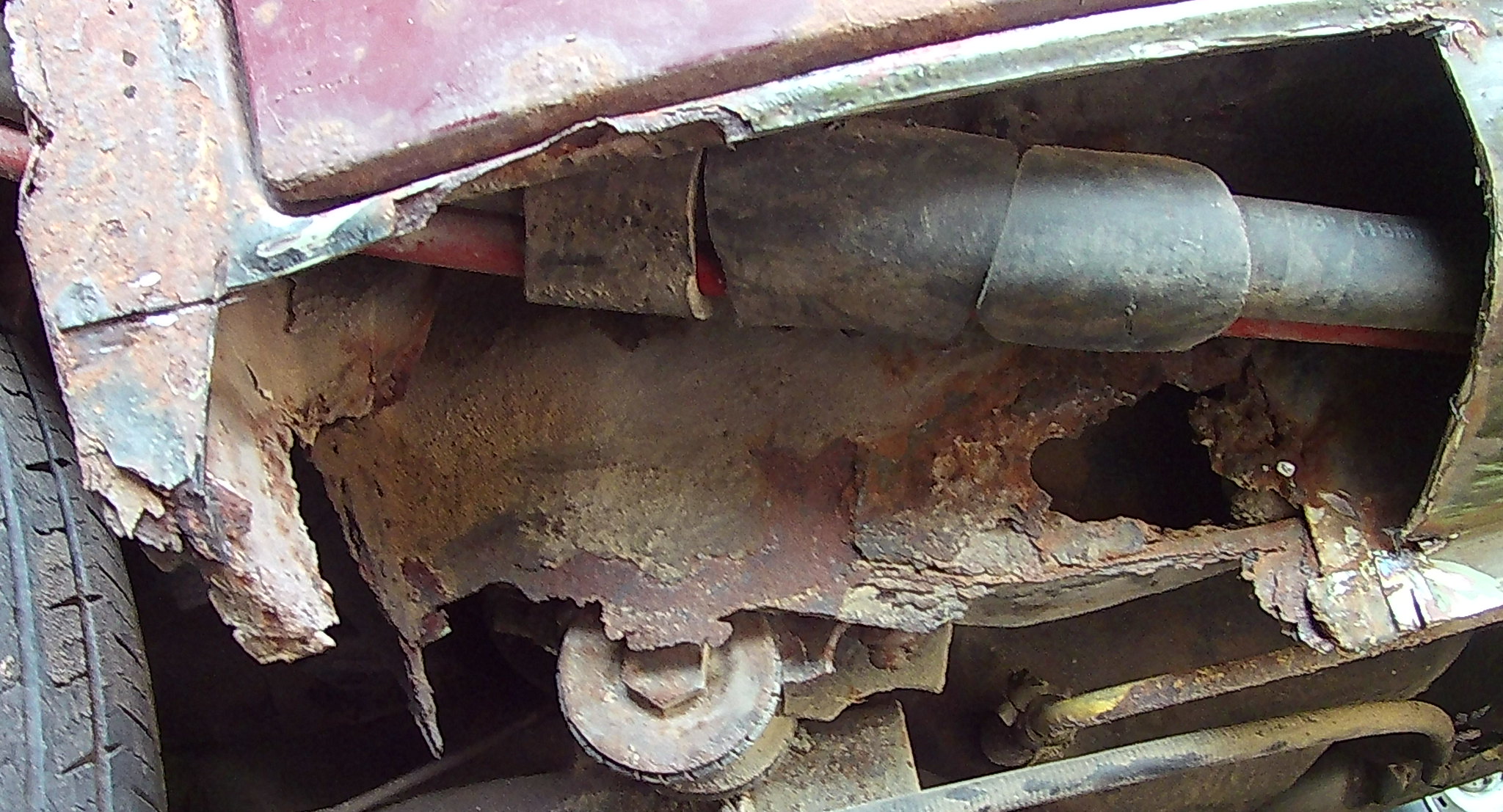 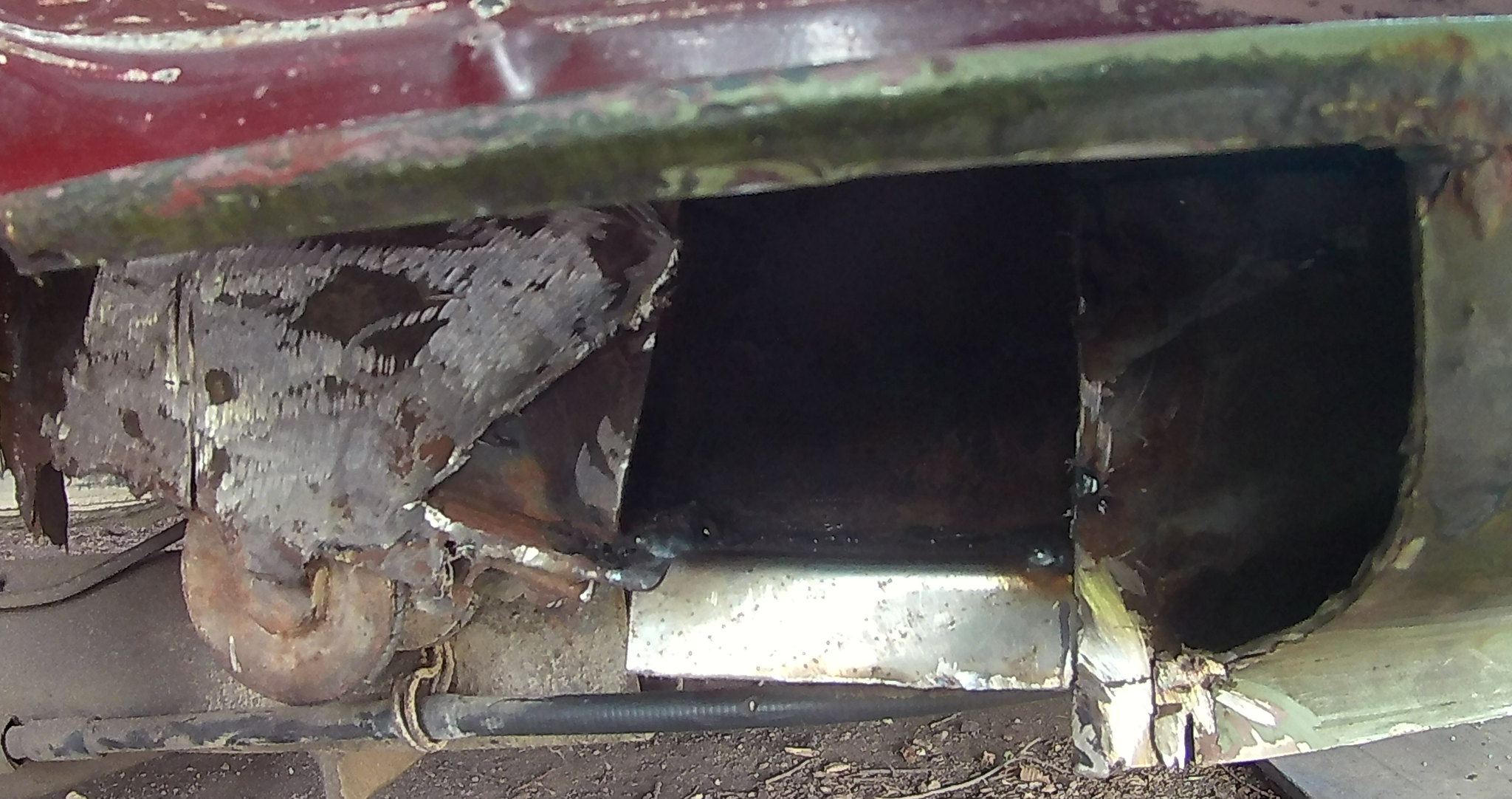 All the patches are made of stainless. 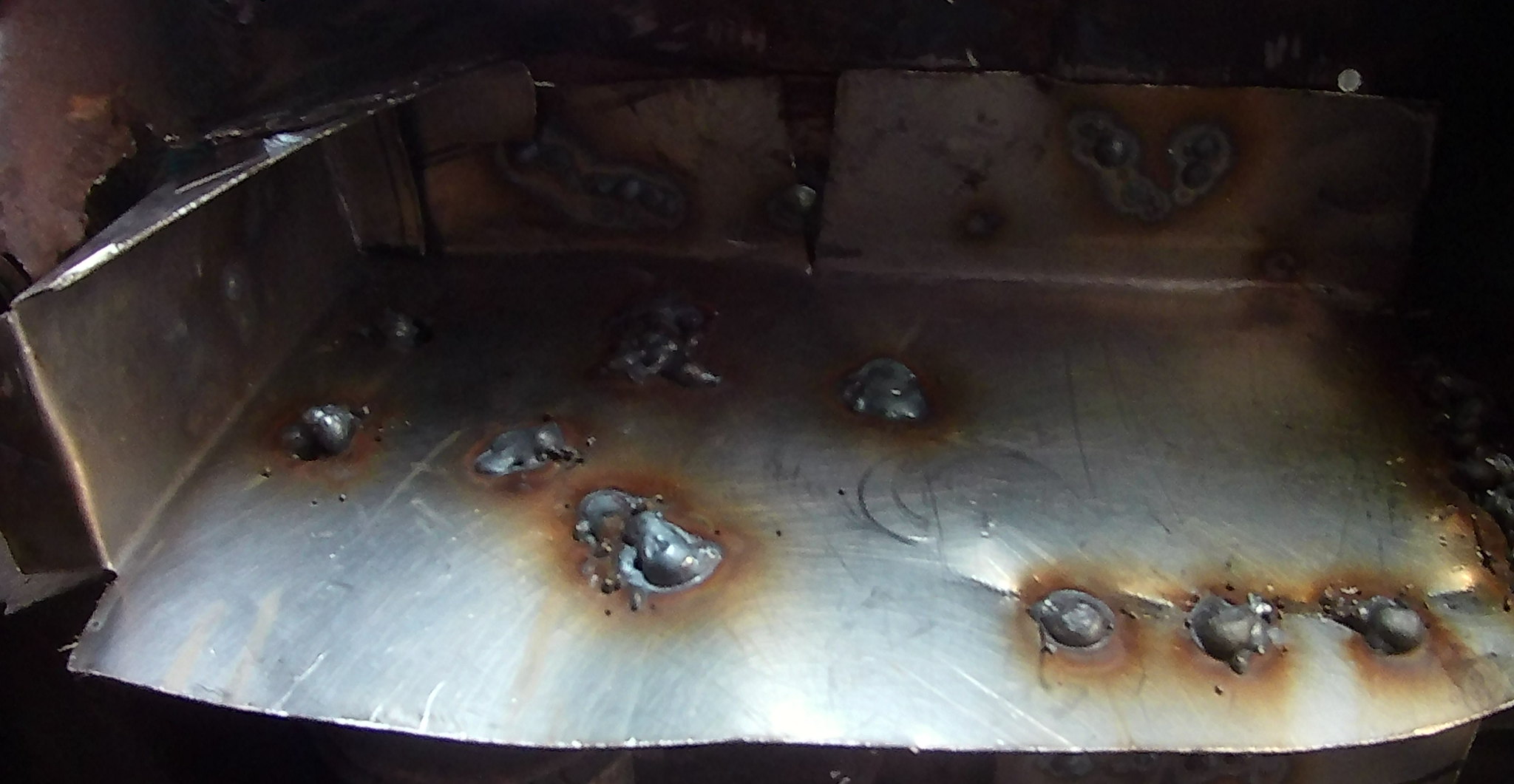 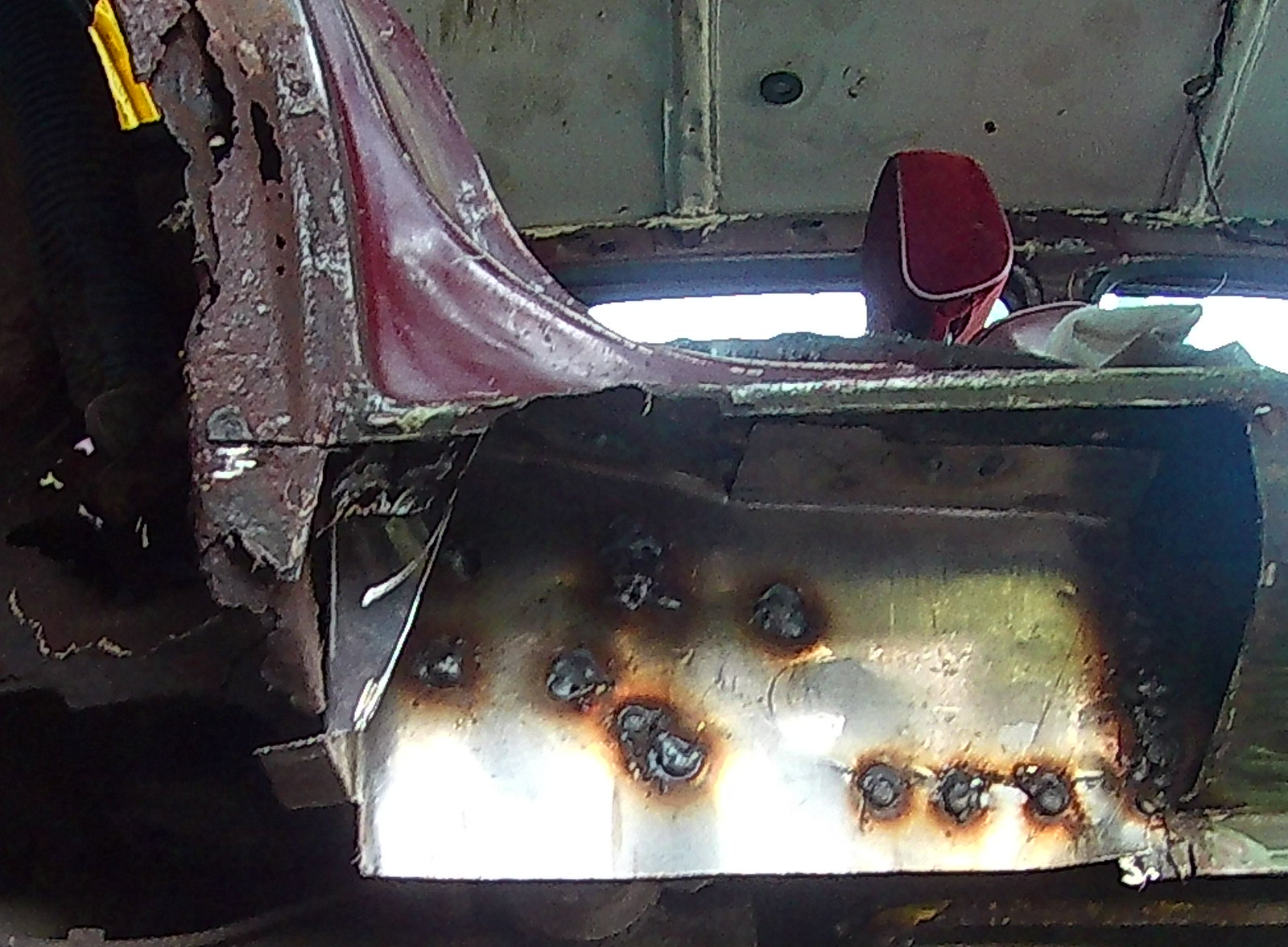 And here's a cover over it: 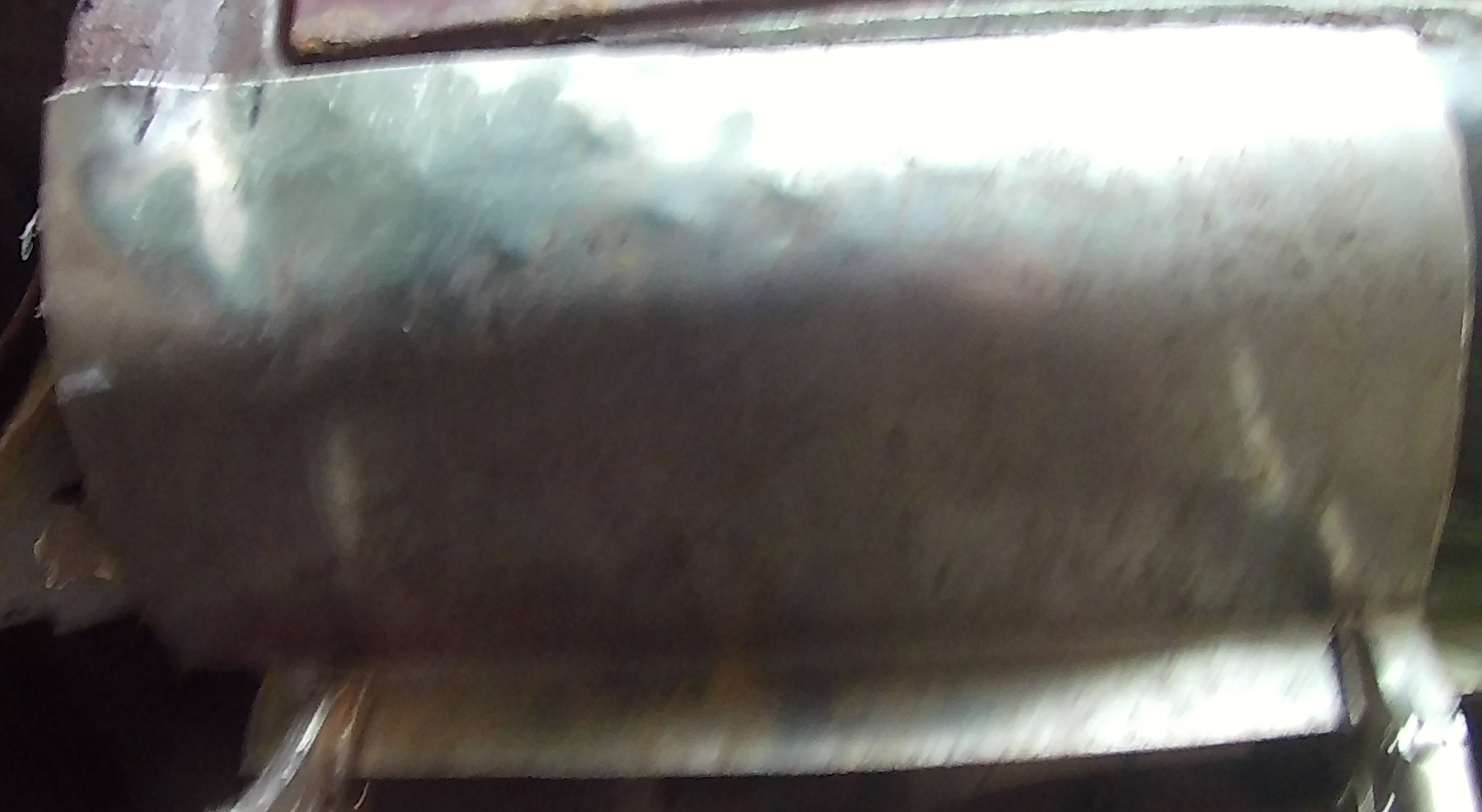 There was a stainless patch on the pside rocker from last time I worked on it.
Much of the underside of the rocker is also already stainless too: 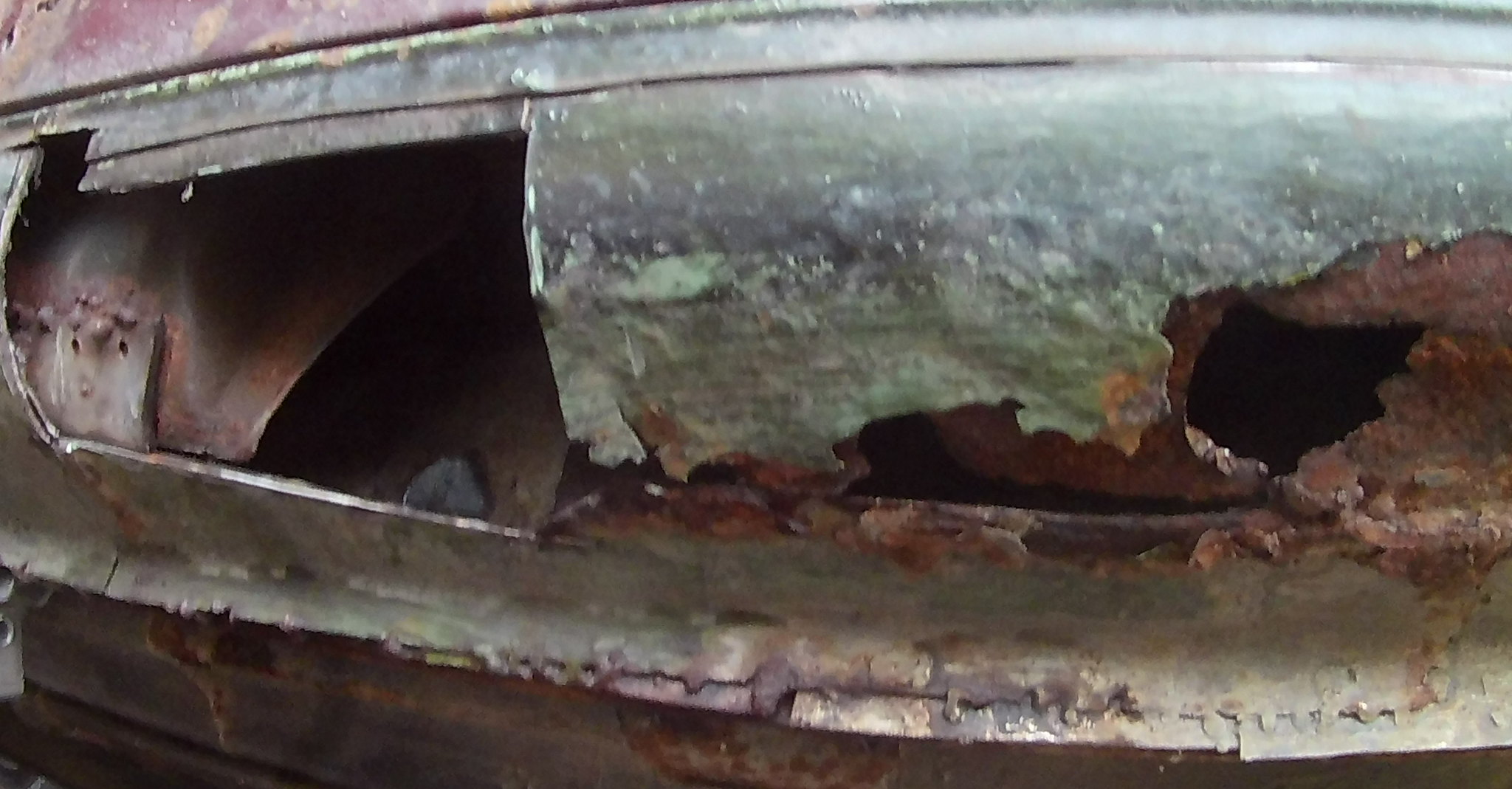 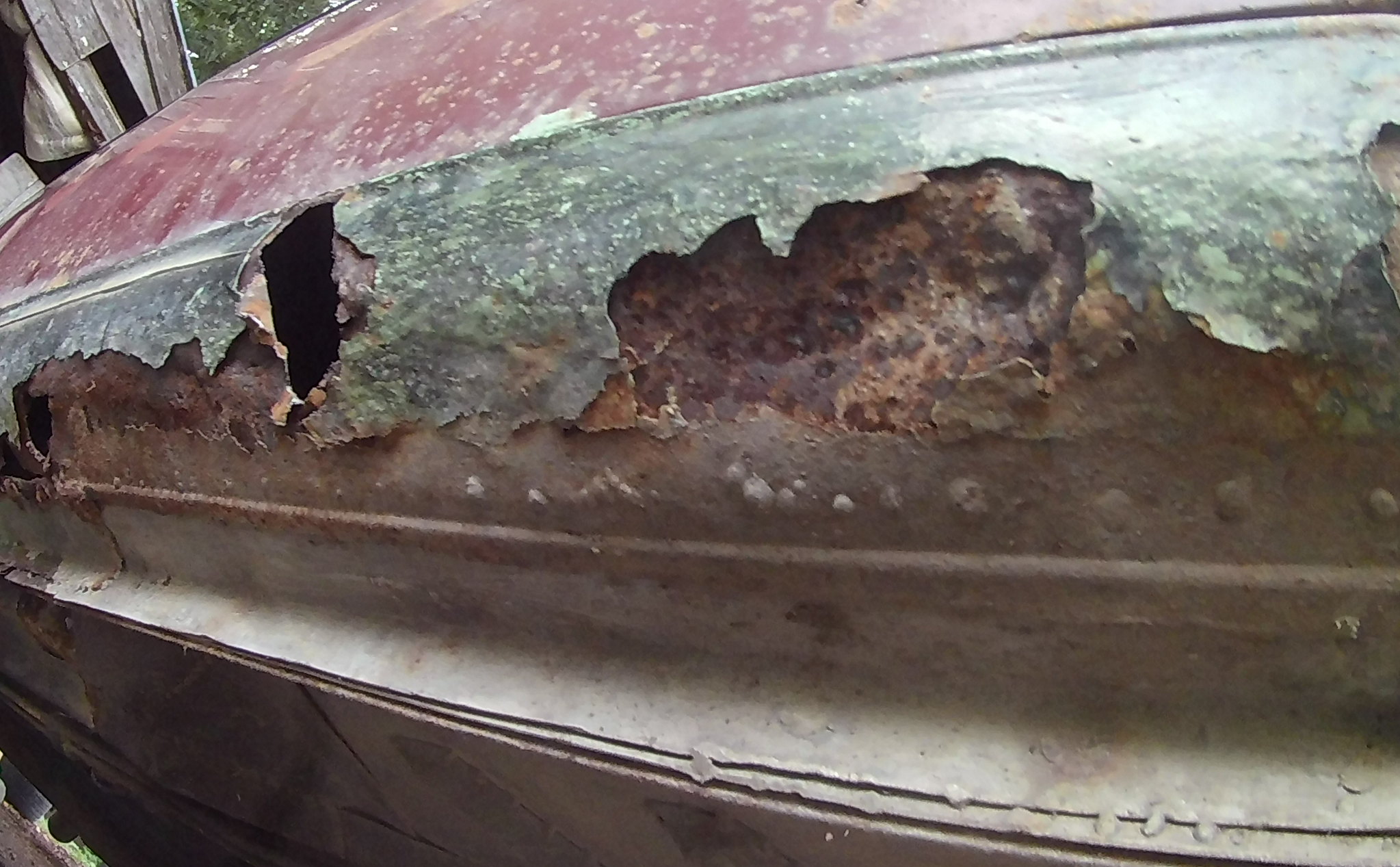 And a picture of the pside rocker done and partially coated with epoxy primer to help alleviate some of the trauma caused by early pictures:

And this part wasn't too bad. Stayed tuned for more horrific pictures of rust and the carnage of time.
I also took videos of the work and intend to host them somewhere.
'91 Golf gasser converted to a 12mm pump, M-TDI.
'84 1.6TD Rabbit with a VNT-15 turbo, still setup to run on vegetable oil.
'84 GTI with 1.7TD pistons and intercooled.
2003 TDI wagon
2000 TDI Jetta.
Top

OK this is how I fix the nose of the pside rocker panel. 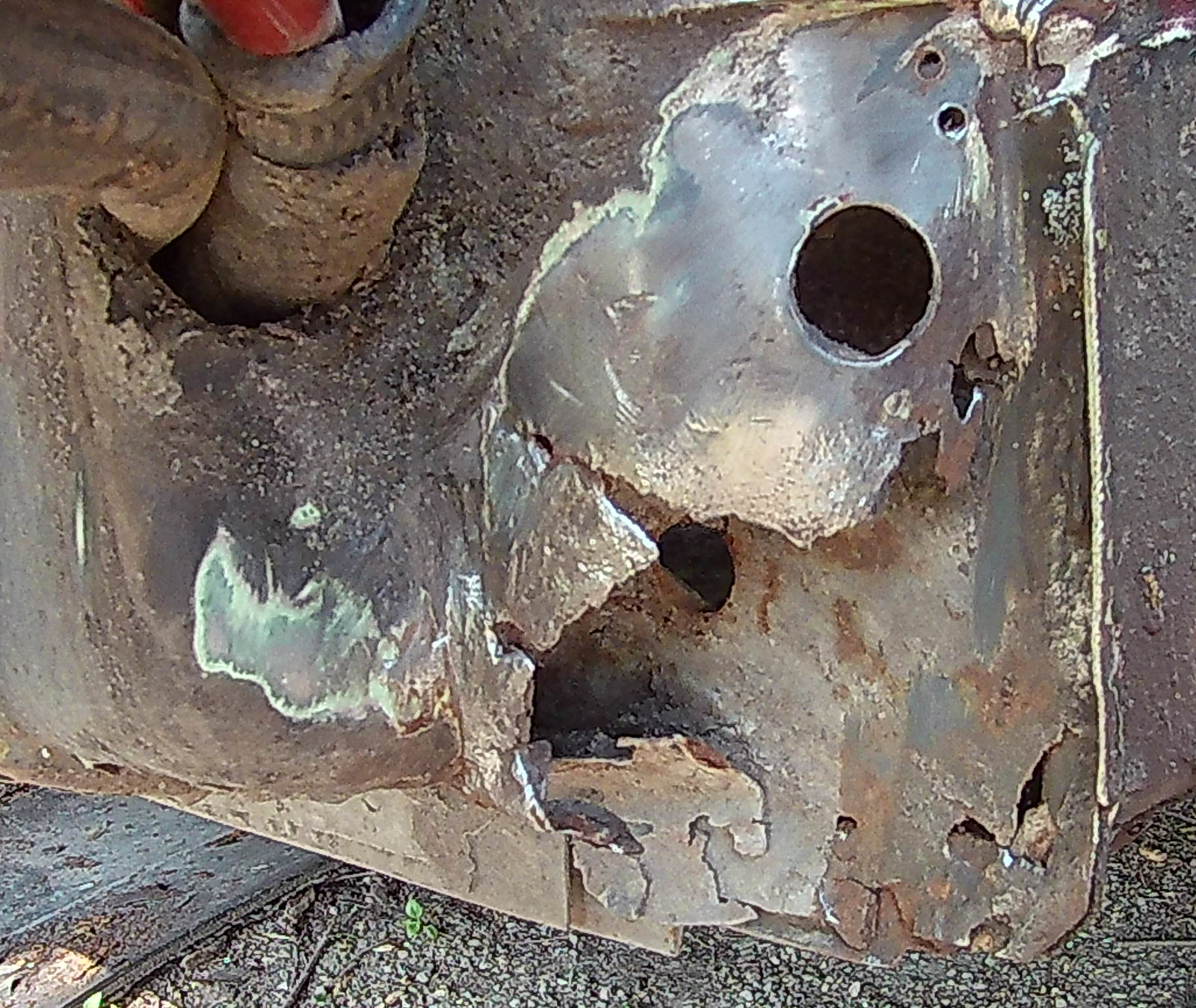 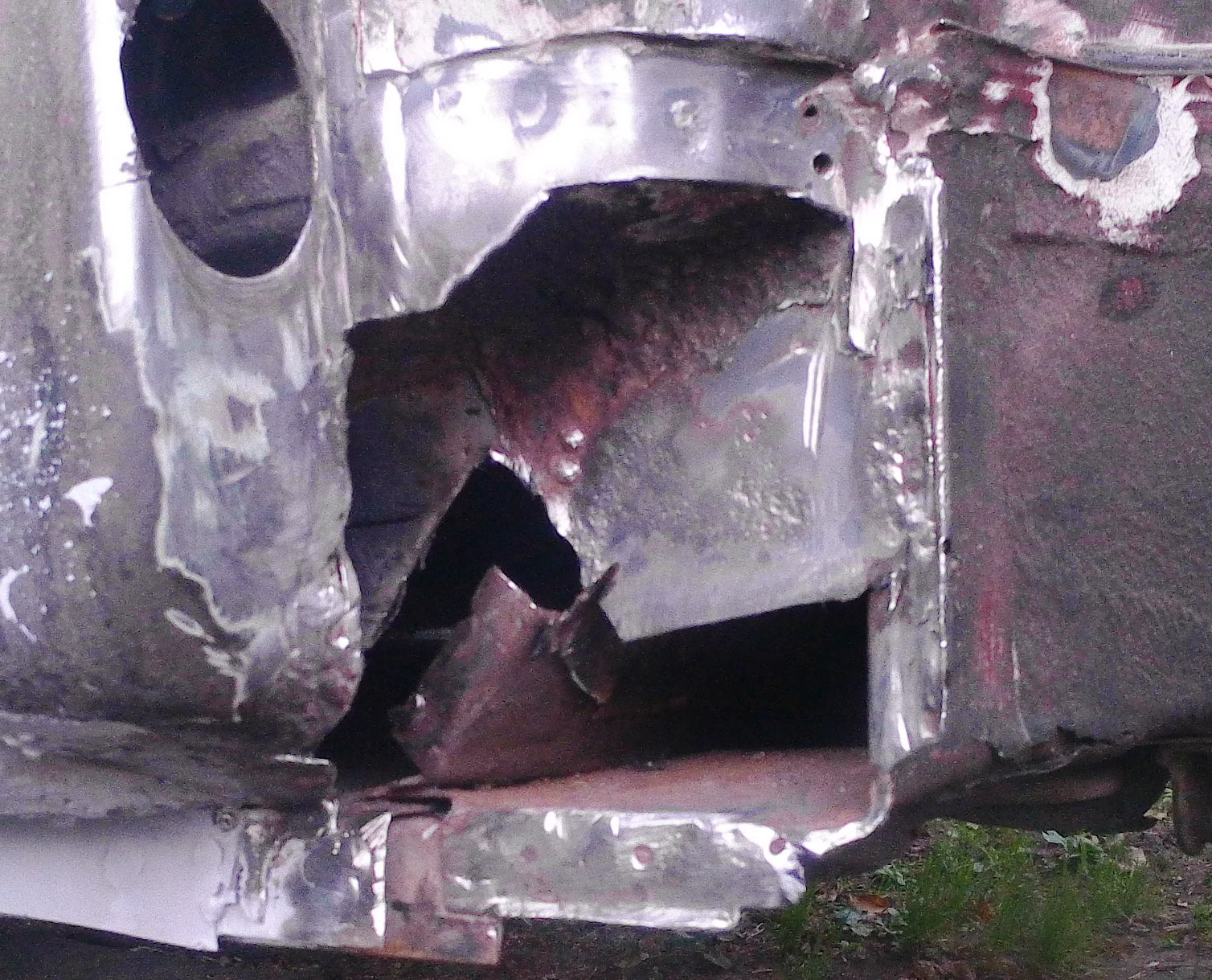 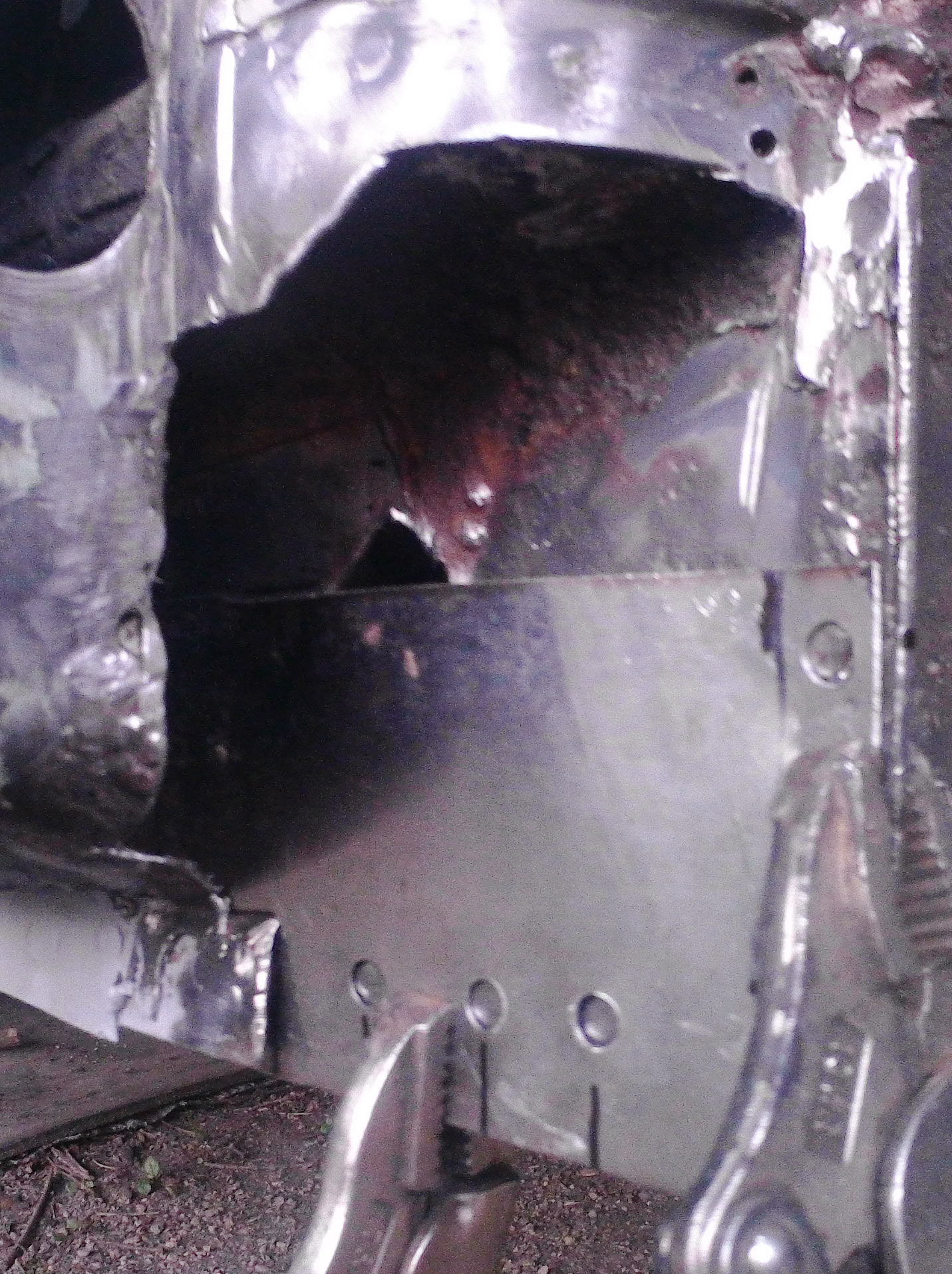 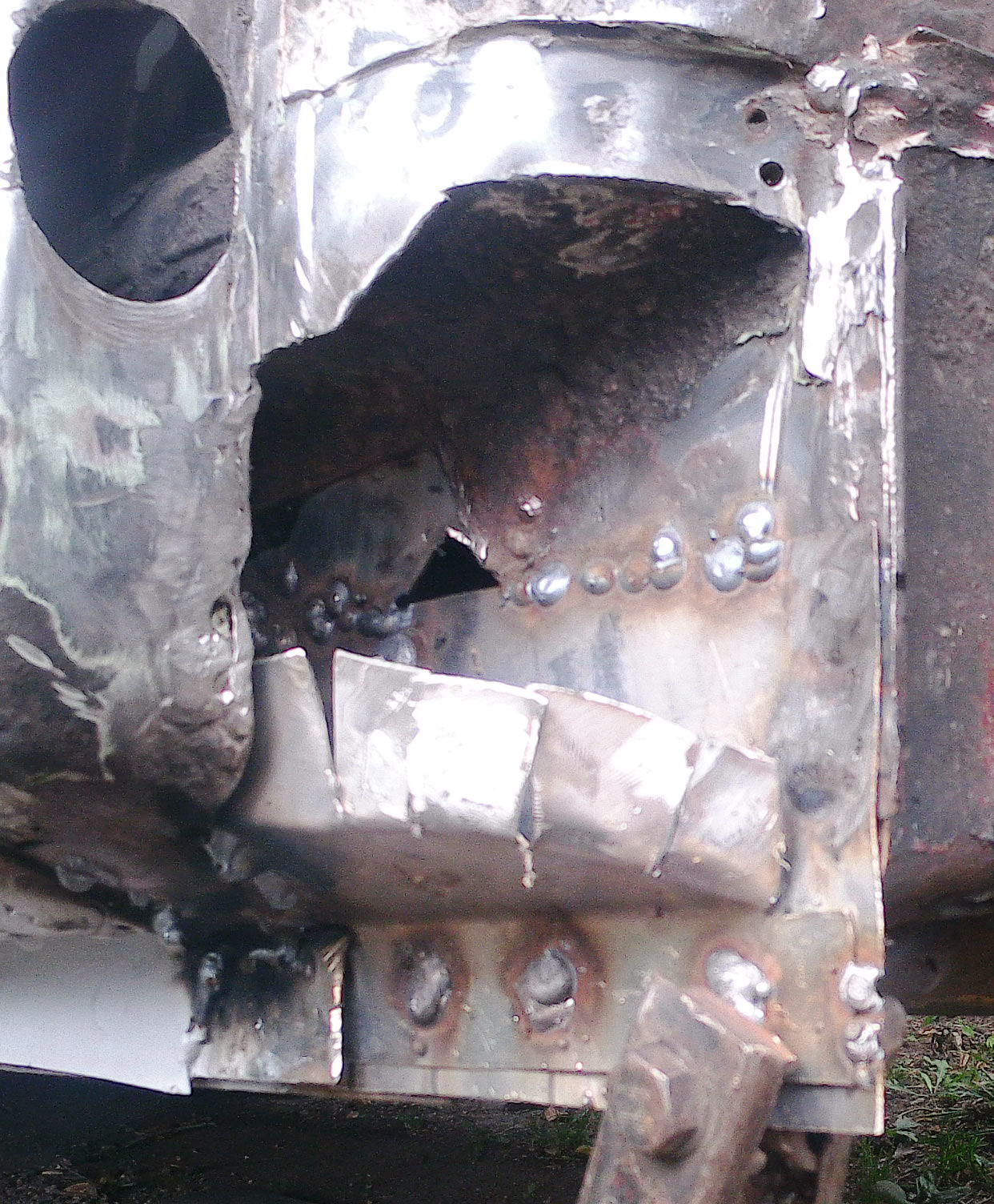 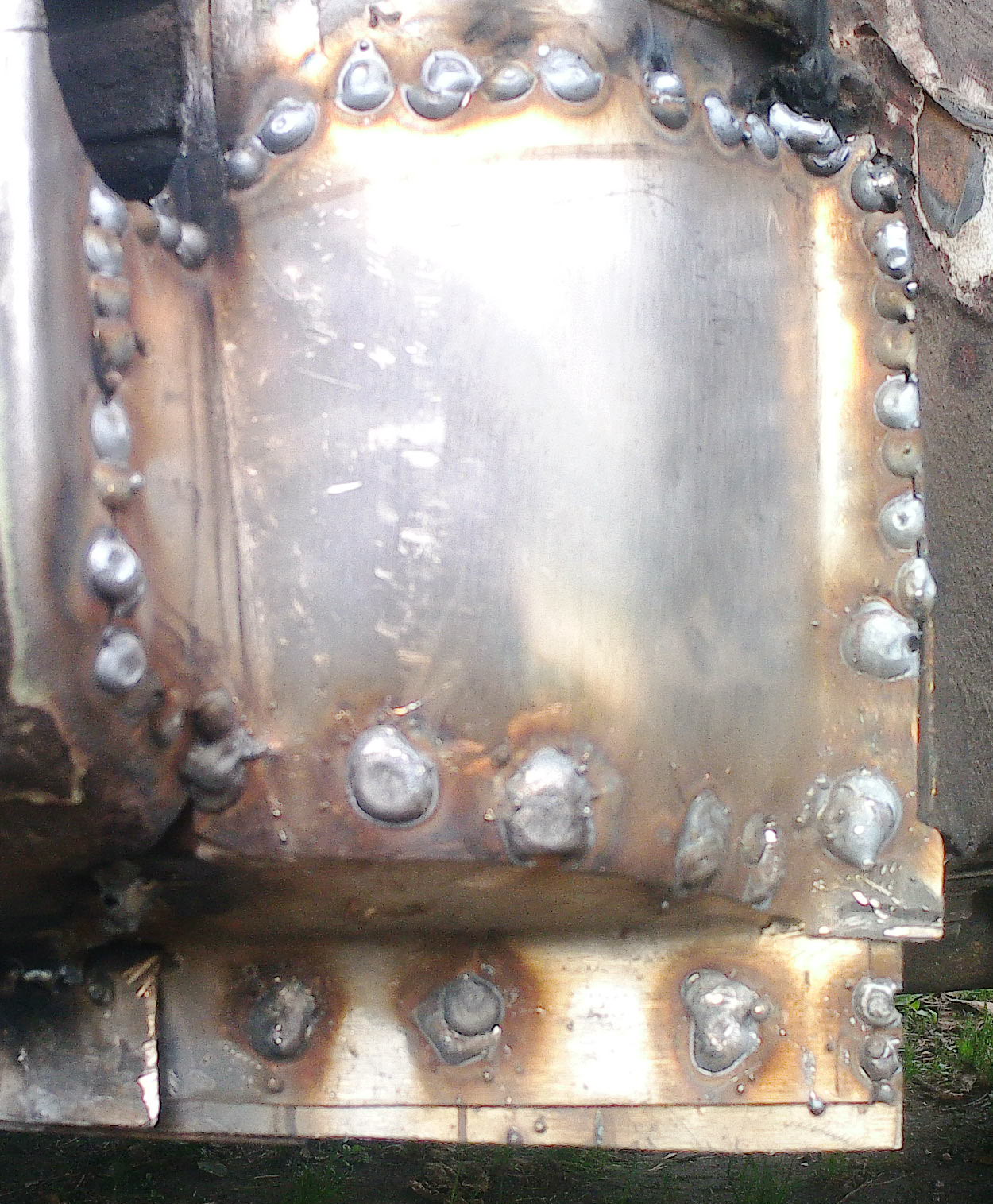