This is a place for us to share progress on and upgrades to our vw diesels.

In the trash pile of over-engineered automobiles people suffer with today, your effort is quite a treasure.
Here's an old page on MB idi injector cleaning , looks like there are some tricks they had back in that day 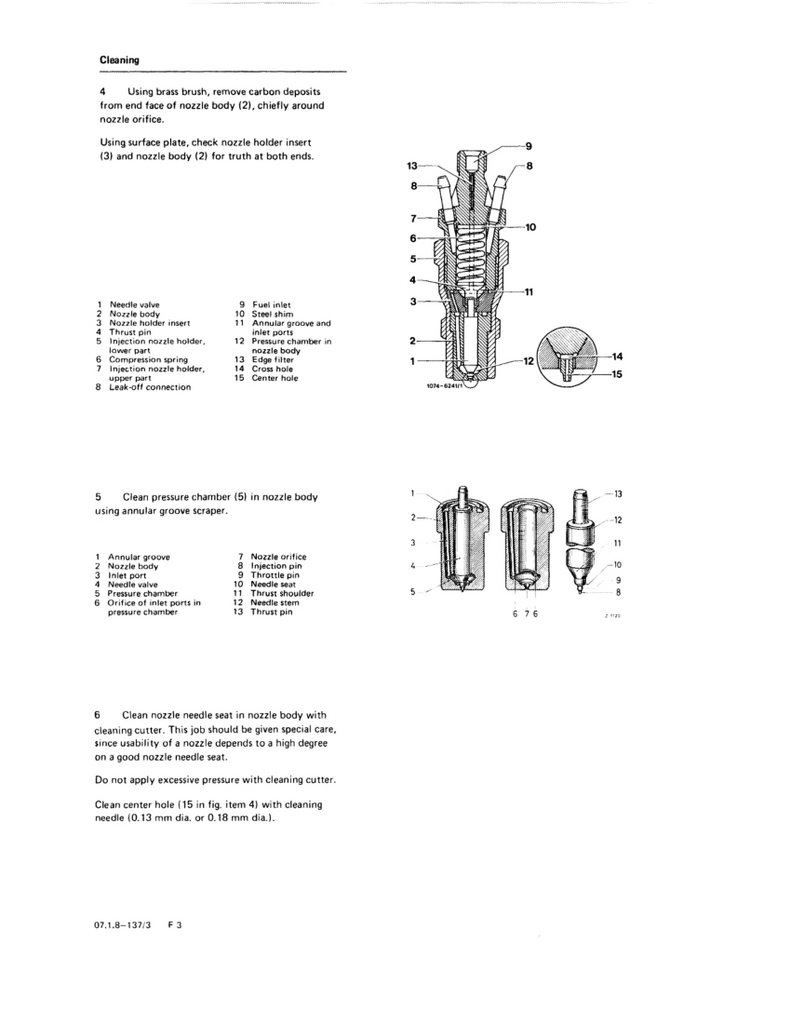 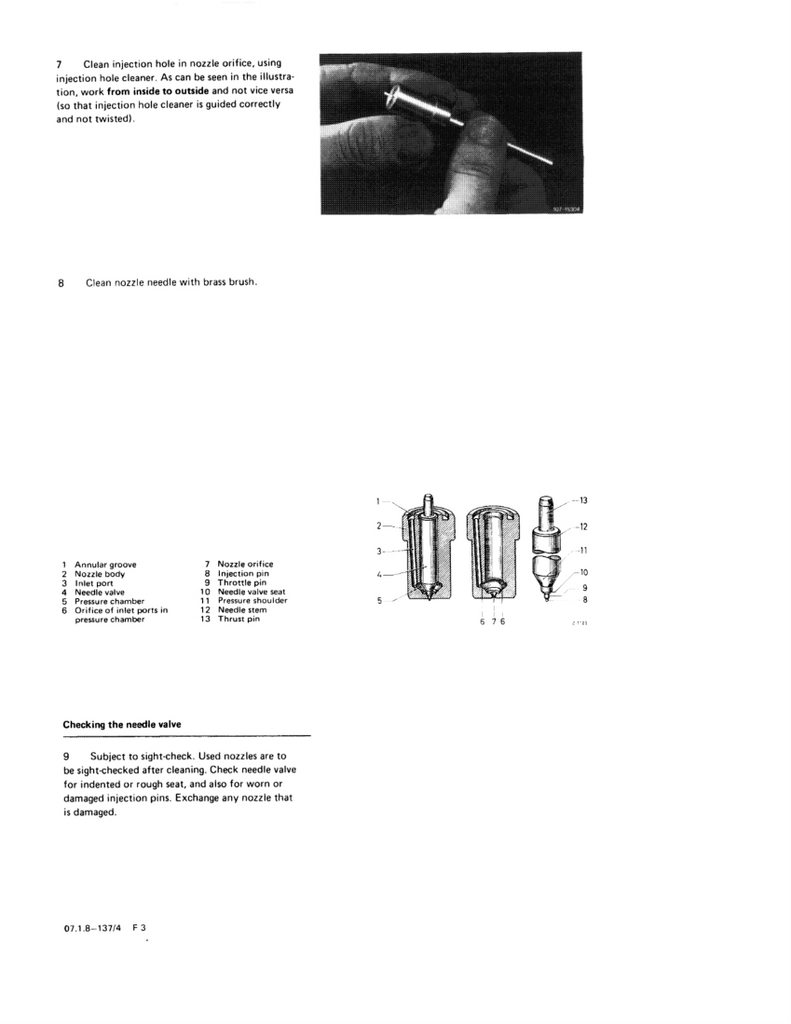 I guess I hadn't thought of trying to clean it.
I haven't had much luck with that before.
But they are really dirty.
Maybe I'll give that a try on the problem one
before trying a nozzle swap.

I'm not familiar with the block heaters, but this o-ring kit has come in handy a few times where the HF ones don't.
https://www.oreillyauto.com/detail/c/do ... r0/799450d

I've read that standard o-rings can be cut to size and superglued. This is actually done in some fields of work. I tried it on an old irrigation valve and it worked.
Glad I did it because later I found out the valve needed replacing anyway, so not much effort was wasted on sourcing that odd size for the test.
81' Scirocco 1.6D (conversion)
86 Golf 1.6D
85' 300TD
Top

Since I've never played with any high HP setups, Pennzoil syncromesh is what I use.
It's probably not as heavy duty as the red, purple, etc. gear oils but it protects the metal properly, cleans out the gearbox, and shifts great.
PennzSyncromesh is a bit thin - that's why it cleans and shifts so well, probably great for cold weather, too.

One thing I like about the PS is I'll buy several online from AA with a code (ex. RMN25), do local store pickup and have plenty.
https://shop.advanceautoparts.com/p/pen ... /7070062-P
These old 020's are generally pretty dirty inside (as brokevw shows) and imo can use several early oil changes to clean them up.
I drove my S1 underwater in Mexico about a year ago and when I got back it needed a couple of quick changes to get the sludge out.

If the gearbox is clean and I want something a bit thicker and HD, I'd go to Valvoline mtf
https://www.valvoline.com/our-products/ ... romesh-mtf

I've read a lot of comments about popular gear oils people use not being formulated exactly for our transmissions,
but the pennzoil and valvoline syncromesh's formulas seem be spot on for the regular 020's.
81' Scirocco 1.6D (conversion)
86 Golf 1.6D
85' 300TD
Top

Great, that's kind of the way I was heading.
It wasn't too dirty.
The fluid was dark but not real smelly.
And there was a little sludge and shine in the bottom of the trany and what I drained.
But I've seen alot worse.

I went to the local Cat place.
They had a good selection of o-rings.
And the guy was very helpful.
Wrote down the sizes he sold me.
29.82mm ID x 2.62mm.
It was a little thick.
probably could have shoved it all in but one side wanted to go in.
Then the other.
I went to o-rings and more and got a 30mm ID x 2.5mm o-ring.
I think that's it.
Was a little hard to slide in but went and stayed.

Also got the synchromesh poured in.
2 quarts.
I think I'm supposed to ad a little more.
But I'll check the level after the jugs have finished draining every drop.
'91 Golf gasser converted to a 12mm pump, M-TDI.
'84 1.6TD Rabbit with a VNT-15 turbo, still setup to run on vegetable oil.
'84 GTI with 1.7TD pistons and intercooled.
2003 TDI wagon
2000 TDI Jetta.
Top

I was thinking it takes 2 quarts plus some.
I made a dipstick so I'll see where it's at.
See if it needs more.

Went to the machine shop today.
The valve guides are installed,..
The aluminum head guy's wife had some health issues.
That more important than a VW head.
I wish them well.

If I had seen that ripped CV boot when the car was on stands.
I wouldn't have to put it back up, remove the axle and swap boots.
I don't like hammering the CV off then back on.
It's hard on the inner clip
and I think I once banged up the little puck seal in the flange
hammering the CV back on.
Causing a leak.

Got the duraterms on their way to NAPA.
Jessie has been reading this and stopped by last week with a fat check.
He told me to get them.
Showed him the pissy injector and what one of the good ones pops like.
Discussed steering column rattle.
The bottom of the steering column it welded to the pinch clamp because it was too loose and rattlely.
I think it's just not bolted to the body right.
It doesn't feel like the bearing has fallen out.
The movement is near the top.
'91 Golf gasser converted to a 12mm pump, M-TDI.
'84 1.6TD Rabbit with a VNT-15 turbo, still setup to run on vegetable oil.
'84 GTI with 1.7TD pistons and intercooled.
2003 TDI wagon
2000 TDI Jetta.
Top

I had the plastic spacer sleeve in the upper column crack, I don't remember how much play it made. Got one from a junkyard porsche that had the steering wheel already removed - score! .
Fortunately they are still not NLA - 171419549
81' Scirocco 1.6D (conversion)
86 Golf 1.6D
85' 300TD
Top

Lifted it back up to drop the oil pan,
change the oil pump and fix the torn axle boot.

The oil pump from his old engine had very little wear so I decided to put it back in his fresh engine.
Besides his had the nice metal pickup
instead of the plastic one.
And I had one of my spendy high flow pumps in there.
When I pulled the screen to make sure there was no crap in it
I noticed the pickup was cracked.
The oil pan was pretty banged up,
one of the hits must have cracked the oil pump pickup.
I like saving those old metal pickups so I had another one in good shape.
I forgot to get a picture but I'll take one.

On to the axle.
I removed it and banged the hell out of it trying to get the CV off.
Couldn't do it. First time ever.
I checked to see if it was one of the old clip-on style
doesn't look like it.
Besides it seems to be very loose where the splines go into the CV.
All jiggly.
Haven't seen that before.
Probably why it won't come off.

Cleaned a path through the parts pile
looking through my stash of axles and realized I've been collecting short driver's side ones.
Because they are usually the ones to go bad.
Not many long ones for a MK1.
Found one with the old clips that are hard to remove.
I'm going to see if Bill has one.
I like the factory ones so much better than the aftermarket ones,..
which this one seems to be because after getting under there with a triplesquare
during the engine removal,..
Found out they were torx.

I changed one out a while back. It seems really odd to me that (they say) when the clicky noise is coming from one side, it's the other side that is bad. That's just how it was on that one. Lucky I had both sides handy.
On those store-bought axles I open up the boot and add more grease for good measure. Some of them have almost none, like the guy on the assembly line in Shenzhen didn't want to tell his boss he was out.
81' Scirocco 1.6D (conversion)
86 Golf 1.6D
85' 300TD
Top

The new axles even look cheaper.
The factory ones are fat and I think hollow.
Instead of the same skinny width the whole length.

I did find enough axle parts to come up with a few really good long axles.
Enough to spare one.
He said the old one was new 15,000 miles ago.
I talked him into getting one of my rebuilt factory ones.
Rock Auto wants about $57 shipped for a new one.
I want $80 for mine, but it is really solid, no play or slop.
$23 bucks more but with a new outer boot.

I still have to play with the one bad injector.
Then I'll have everything buttoned up but the head.

Every time I fix someone else's Rabbit my parts hoard gets a little smaller, ha.
That's OK as long as I don't come up short when I find the one more perfect Rabbit project for myself.

I have a serious choice to make.
I can get a pretty much complete factory turbo diesel Rabbit in a box,.. that needs very little welding along the seat rails
or a solid Rabbit pickup with a great engine installed but not hooked up.

My choice either one for $1800.
From "Burned Rabbits",..
a moment of silence for those that were lost.
But a few still remain.
I'll take some pics and post them on the vortex so someone can help me with this difficult decision.
'91 Golf gasser converted to a 12mm pump, M-TDI.
'84 1.6TD Rabbit with a VNT-15 turbo, still setup to run on vegetable oil.
'84 GTI with 1.7TD pistons and intercooled.
2003 TDI wagon
2000 TDI Jetta.
Top

Just one? lol - What if the other orphan rabbit ends up being abused, on the street improperly pimped out, or left for dead in a field ?

A lot of people REALLY like those mk1's, but few can do the work (to get them back to life).
Rarely do I see them for sale any more unless they've been left for dead